As the host to the royal moment of the year, Paddington’s community was first to celebrate the birth of Princess Charlotte Elizabeth Diana of Cambridge as they gathered at the call of a traditional town crier to wet the baby’s head beneath a canopy of pink bunting fluttering on Praed Street outside St Mary’s Hospital.

Having hosted the world’s media and royal fans as they patiently waited for the big news, Paddington’s atmosphere has been highly charged for weeks. Now the birthday has arrived, PaddingtonNow, the Business Improvement District for the area around St Mary’s Hospital, has brought together the local community to welcome the new royal with a bang.

Kay Buxton, CEO of PaddingtonNow, said, “The new Princess marks the 11th royal birth in Paddington, and it’s fantastic to have the area buzzing with excitement again. This year we’re bringing together the whole community to celebrate and the toast is just the first in our line-up of festivities as businesses across the area host special offers and activities.”

Just down the road from the hospital, Hilton London Paddington and the Sussex Arms pub joined in the celebrations, illuminating their buildings in pink lights to mark the arrival of the new Princess, while Paddington Basin’s water maze was re-lit in pink. Winning Moves, the masterminds behind exclusive editions of Monopoly and Bananagrams, have also created a new version of the world’s favourite card game Top Trumps entitled ‘Game of Crowns’, which sees the new baby royal as one of the pack of royals, politicians and UK celebs battling it out for keys to the Kingdom.

Following on from the birthday celebrations, we called on businesses in the area to rejoice again on the announcement of the baby’s name.

From a newly named cocktail to a discounted Paddington Bear toy for those lucky enough to have the same name or birthday as Princess Charlotte, local workers, residents and visitors alike have been joining in the celebrations. 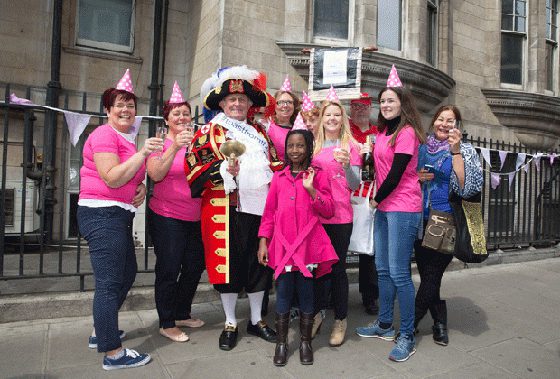