Vaughan Smith – esteemed journalist and founder of London’s ultimate press club, Frontline – was announced yesterday evening as the new chairman of PaddingtonNow – representing the interests of over 350 businesses across the area east, south and west of Paddington Station.

The announcement comes just one week after the landmark opening of editor of Monocle, Tyler Brulé’s Kioskafé, marking a big moment for Paddington as the two renowned media moguls join forces to put the area in the spotlight of London.

Smith has been invested in the Paddington area for over a decade, seeing it through major moments such as the Olympics and two recent royal births. His new role will see him work with CEO of PaddingtonNow, Kay Buxton supporting the BID’s board, to secure the legacy of the last 10 years’ success and ensure Paddington is recognised as a major London destination for both business and tourism.

Vaughan Smith, chairman, PaddingtonNow, says: “Having travelled the world over, you realise how well respected Paddington is becoming as a place to do business. We have a growing media cluster choosing Paddington as home, and this is no coincidence, with unrivalled transport links, a working environment second to none and breath-taking amenity, including Paddington Basin, Little Venice, delightful contrasting garden squares and Hyde Park. I look forward to working closely with all of our businesses and wider stakeholders to enable us to fulfil Paddington’s potential.”

This quarter of central London is set to benefit from unparalleled investment, with Crossrail services due to commence at the end of 2018 and development schemes within the BID area creating new commercial space and attracting new brands to Paddington. Smith will work with Buxton, Brulé and major stakeholders across the area’s business community, including key partners Westminster City Council and the Mayor’s Office as well as the GLA and London’s promotional bodies, to continue to drive forward the rapid rise of the area and secure its positive future.

CEO of PaddingtonNow Kay Buxton, says of the appointment of Smith as chair, “Good journalism and business go hand in hand and Vaughan has been instrumental in bringing this community together in Paddington throughout his career, from his initial investment in Paddington in 2003, to this pivotal point where he steps forward to take the reins of the Business Improvement District. He shares our values and vision to bring people together and drive forward our plan to deliver a prosperous future for our businesses and stakeholders.”

Not your average business leader, Smith was previously an army officer before setting up Frontline News agency. He has since been a video journalist in 20 conflicts from Grozny to the Gulf War, has been shot twice in the act and won 28 awards either alone or as part of a team. He founded the Frontline Club in 2003 primarily as a sanctuary for independent journalists and to promote the vital role they play in contributing to public knowledge. The club has since attracted membership from some of the biggest names in journalism from Martin Bell and Antony Loyd to Jon Lee Anderson.

Smith takes the reins from previous chair, Mark Roth, General Manager of Hilton London Paddington and will be in position for a two year tenure. 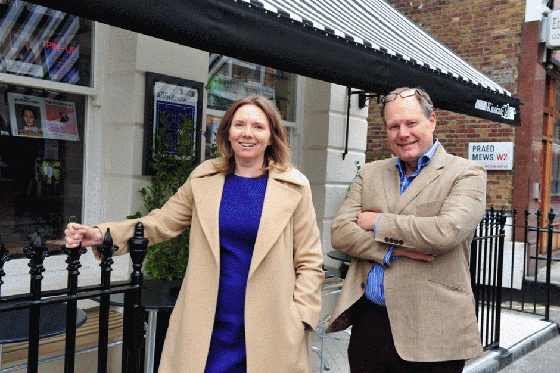